In the world of media, there many pieces of work that can put change in a person’s life. It can give them perspective, or offer a solution to a problem. It can teach life lessons as well as give a person reminders about life, or show them something they’re missing.
In this article I am going to be discussing three movies that gave me perspective about life and gave me insights about issues.
The first movie I am going to be discussing is Scarface. Scarface is an action movie about a man from Cuba who came to the United States to have a better life. The movie takes place in Miami, Florida. In this movie Al Pacino plays the lead role of Tony Montana.
Tony Montana started working for a food stand and eventually got involved in criminal activity. He eventually worked his way up to become a drug lord and started to live a fast placed and luxurious life. 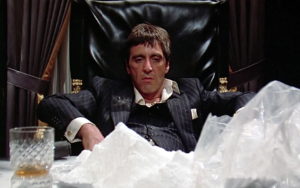 Throughout the movie Tony Montana gives insights about life. He stresses that “The world is yours for the taking, you just gotta grab it by the balls” insisting that you can do anything in this life if you jump on it.
Tony Montana goes on a task to New York City as work for another criminal leader. The task was to blow up a car with a man inside it. When Tony discovers that the man’s family gets in the car, he says, “no women or kids” and objects to the other guy setting off the detonator to the car. When the man tries to set off the detonator, Tony shoots him in the head.
The man Tony was working for became enraged by this, as it was one of his men that Tony shot and killed. He calls Tony and Tony becomes enraged as well. Tony instigates going to war with the other criminal organization.
The other criminal organization later raids Tony’s mansion, killing his men and eventually killing Tony, not without a vigorous fight, of course.
This movie has taught me a lesson, sometimes in life, while sticking to your values and morals, bad things can happen to you because of it. This movie also shows that you can’t be the good guy and the bad guy at the same time, it’s one or the other.
The next movie I am going to discuss is Karate Kid.
In Karate Kid, a teenage boy moves to a new town with his mother where he meets a girl. Eventually, he is confronted by bullies and gets beat up by them. The bullies knew Karate. 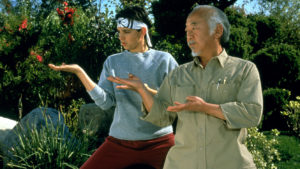 One night, an altercation with the bullies leads to the bullies chasing the boy. This is where the janitor of the apartment complex where the boy lives jumps in, and uses Karate! He takes all of the bullies down.
The janitor eventually takes the boy under his wing and begins teaching him Karate.
An important lesson I learned from this movie is where he teaches the boy in indirect ways how to do Karate, like doing certain tasks that the boy at first didn’t like. It shows that not everything is as it seems and that basics are important.
The boy later goes against the bullies in a Karate tournament, where he defeats the bully with a kicking move. The bully charges at him while he was patiently in position, this teaches that patience pays off, and that when you rush into things, you can fail.
After the match, the teacher of the bully confronts the janitor, and swings his fist, the janitor moves to the side and the teacher cuts his hand from punching the glass, this again proves that patience is key.
The last movie I am going to be discussing is Taken.
Taken is about a man who’s daughter was kidnapped, so he has to go through many gang members to get his daughter back. He overcomes several obstacles, and the movie shows that good parents will do anything for their kids, even if it means risking their own life.
The movie also teaches if you pursue something hard enough you will achieve it. In this case, it was a man chasing after his daughter. The movie expresses explicitly what the parent had to go through to get his daughter back and it shows that if you want something bad enough, sometimes you have to go through extremely hard things. 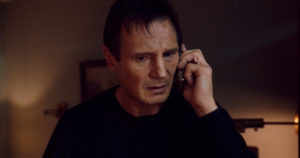